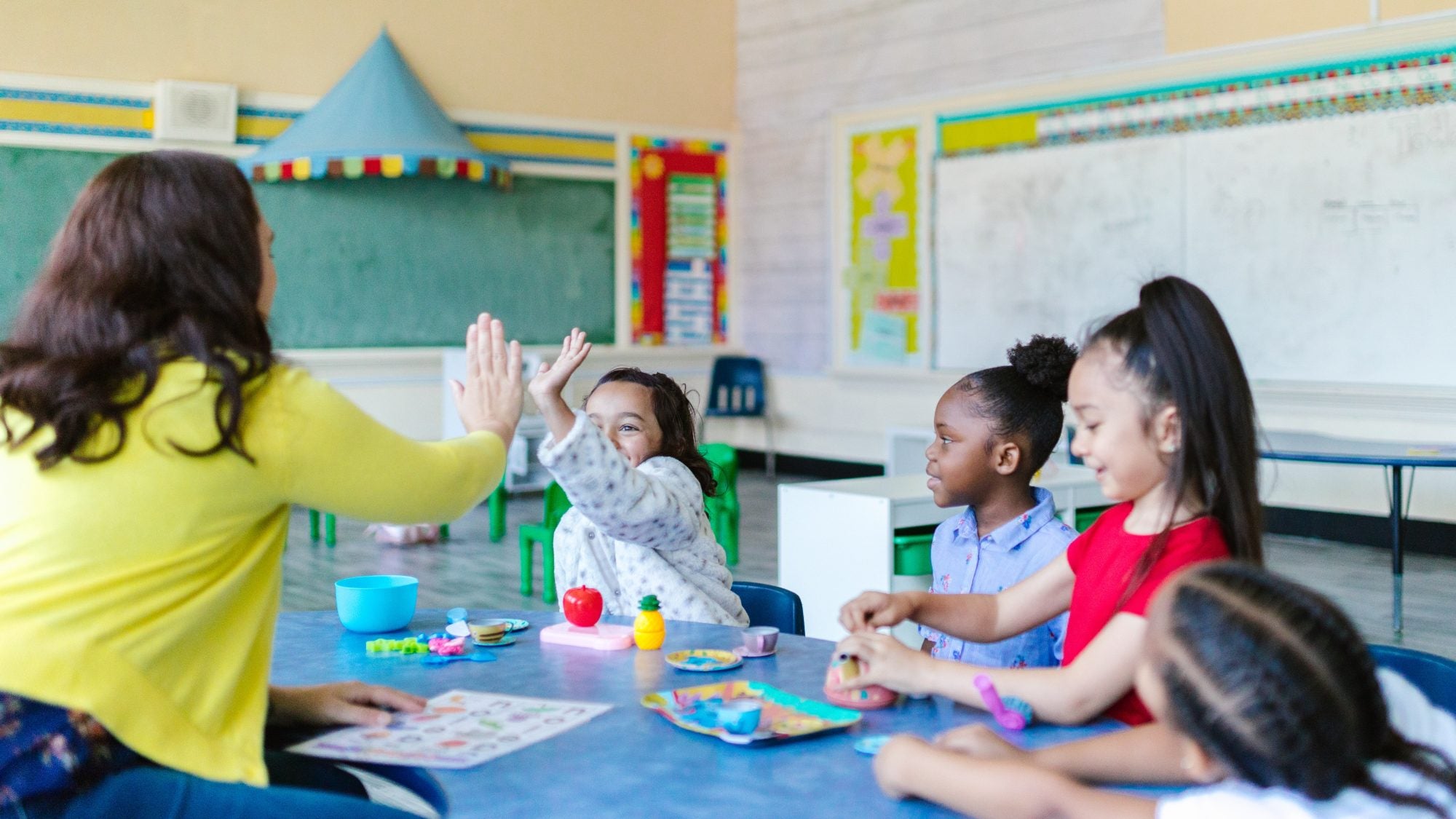 For more than two decades, Dr. Bill Gormley and Dr. Deborah Phillips, co-directors of the  McCourt School of Public Policy’s Center for Research on Children in the United States (CROCUS), and a multidisciplinary team of researchers have studied the effects of Oklahoma’s universal pre-kindergarten (UPK) program, available on a voluntary basis, free of charge, to all four-year-olds in the state. Their focus has been on the city of Tulsa, which has the largest school district in Oklahoma.

At a McCourt School conference on September 20, 2022, CROCUS experts revealed that Tulsa’s UPK program has successfully produced a wide range of outcomes — from early academic progress and socio-emotional development to high school graduation, college enrollment and even participation in civic life as young adults. Timothy Bartik, a CROCUS collaborator and senior economist at the Upjohn Institute, estimates that the benefits of TPS’ pre-K program exceed the short-term costs by 2.65 to 1.

The preschool advantage beyond kindergarten

A key motivator for this research is the “fade out” hypothesis, which theorizes that the benefits of early childhood education diminish or even disappear over time. In multiple studies, Georgetown University researchers have found that Tulsa pre-K alumni continue to perform better than a comparable group of peers, despite some fade out.

Many of Gormley and Phillips’ findings come from a cohort of more than 4,000 Tulsa Public Schools (TPS) students who entered kindergarten in the fall of 2006. Some of these students attended TPS pre-K or Head Start, while others attended neither program.

Anna Johnson, provost’s distinguished associate professor of psychology at Georgetown, is leading a parallel study of more than 1,000 disadvantaged TPS students who entered kindergarten in the fall of 2018. Recently published findings from her research lab, known as School Experiences and Early Development (SEED), reveal that the children who attended preschool maintained advantages over non-attenders into third grade; in particular, their math and self-regulation skills are better than those of students who did not receive an early childhood education.

Not only do new research findings from CROCUS and SEED suggest that preschool benefits are sustained beyond kindergarten, but evidence also shows that the positive effects of a strong, school-based pre-K program continue to reverberate through high school and beyond.

Sara Amadon, senior research scientist at Child Trends, identified a number of important differences at the end of 11th grade between students who attended pre-K and students who did not. 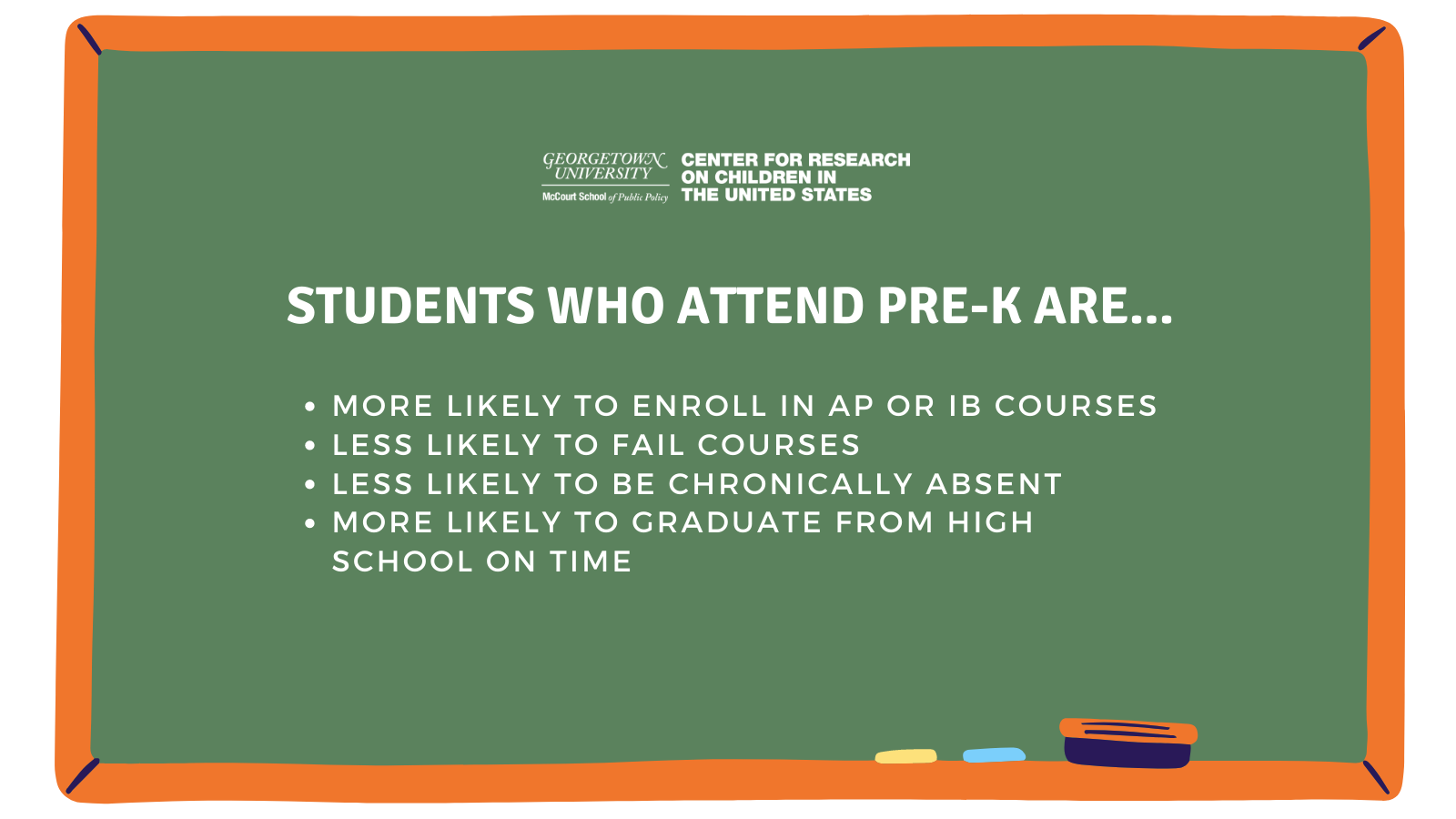 The effects of pre-K that persist through adulthood

When it comes to civic engagement, preschool attendance is also a good predictor of whether young adults register to vote and, ultimately, cast their ballots. Karin Kitchens, a Georgetown alumna and assistant professor of political science at Virginia Tech University, reported that pre-K improves cognitive and socio-emotional skills, which are linked to voter registration and voting.

Although attempts to pass legislation for government-funded preschool at the federal level have proven unsuccessful thus far, eight states, including the District of Columbia, and a growing number of cities have instituted universal pre-kindergarten programs for four-year-old children and even some three-year-olds.

“The findings from Tulsa are significant and prove that there is a successful model for government-funded pre-K, even in one of the poorest states in America, that could be replicated in other cities across the country,” said Gormley.

“Our research underscores the importance of high-quality early childhood education and its capacity to alter children’s lives for the better,” said Phillips.