Rep. John Lewis (D-Georgia) spent his life fighting for racial justice and equality. The civil rights icon is remembered for his moral courage and leadership that inspired many to continue getting into “good trouble” in the fight for justice and equality. In 2015, he received an honorary degree from Georgetown and shared remarks as the keynote speaker at the McCourt School’s commencement ceremony. 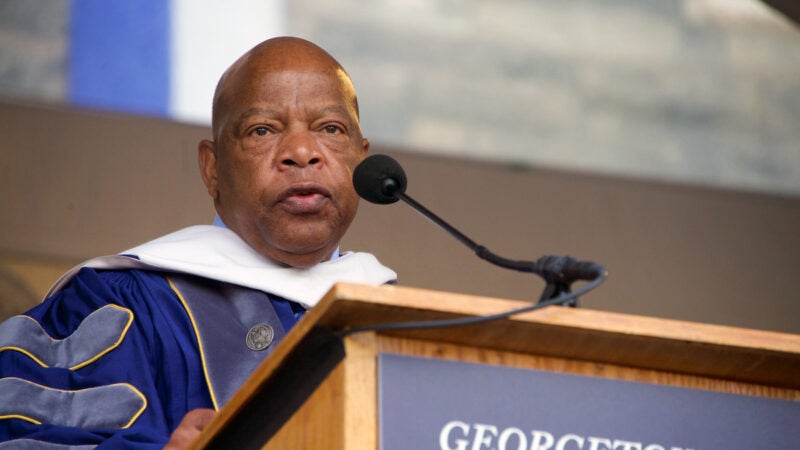 Known for his activism in the civil rights movement, Lewis was chair of the Student Nonviolent Coordinating Committee (SNCC). He organized countless sit-ins, voter registration drives and Freedom Rides throughout the segregated South where he endured brutal beatings from white supremacists.

In 1963, at the age of 23, Lewis was the youngest speaker to share remarks during the March on Washington for Jobs and Freedom where Martin Luther King Jr. delivered the “I Have a Dream” speech. In 1965, Lewis led over 600 civil rights protestors across the Edmund Pettus Bridge during the historic “Bloody Sunday” march in Selma, Alabama.

Lewis served in Congress for more than 30 years and was often referred to as the “conscience of Congress.”

Throughout his life, he received many awards in recognition of his inspiring leadership and commitment to public service including the Presidential Medal of Freedom in 2011. In 2015, Congressman Lewis received an honorary degree from Georgetown and served as the keynote speaker at the McCourt School’s commencement ceremony.

Congressman John Lewis is remembered as a civil rights icon who led with moral courage and inspired many to continue getting into “good trouble” in the fight for justice and equality.

Below is an excerpt from his keynote address at the 2015 McCourt School commencement ceremony.

I didn’t like what I saw, and Dr. King, and Gandhi, and Thoreau and others, provided us a way out. Before any sit-in, before going on a Freedom Ride, before marching from Selma to Montgomery, we studied. You have studied. We prepared ourselves. We studied the philosophy and the discipline of nonviolence, and we became committed to the way of peace, the way of love, the way of nonviolence as a way of life, as a way of living. So, I say to you as you leave here –– never, ever hate, for hate is too heavy a burden to bear. The way of love is a better way.

You must get out there and lead. You must be headlights and not taillights. Yes, I did get arrested a few times. Yes, I was left bloody and unconscious, but I didn’t give up. I didn’t become bitter.

If we want to see a nation, a world at peace with itself, then we must live peaceful lives. We don’t need to spend more money, more of our limited resources on bombs, missiles, and guns. Use our resources to help those that have been left out and left behind. I tell you, in spite of all the difficulties, I’m still hopeful, still optimistic. You must be hopeful. You must be optimistic. You must work hard, and you must be happy.”