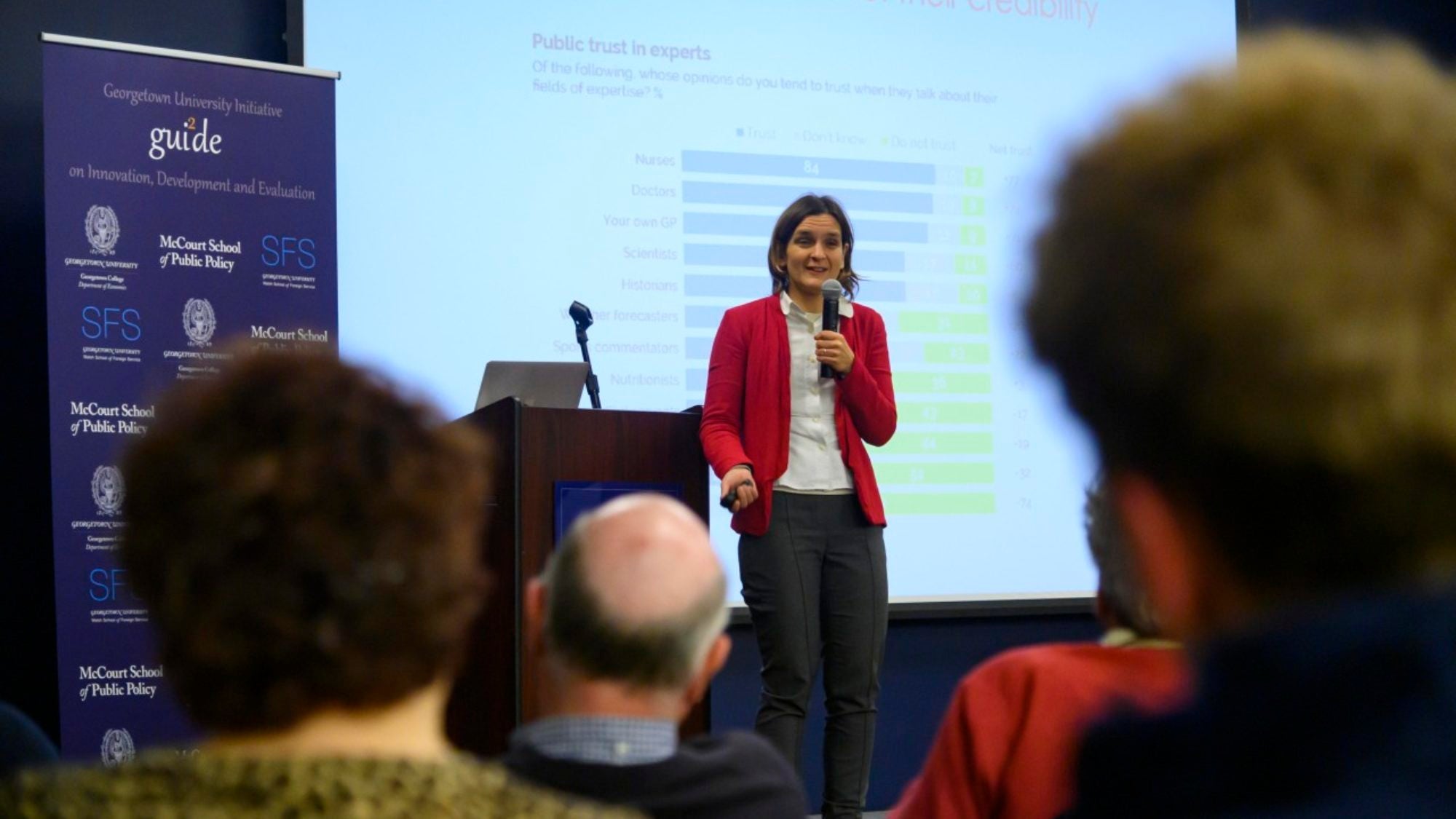 Nobel Laureate Esther Duflo visited the Hilltop to discuss Good Economics in Hard Times, a book she co-authored with Abhijit Banerjee. Duflo discussed emerging themes from the book and how they can apply to rethinking economic policy.

In a 2017 YouGov poll, public opinion in the UK rated weather forecasters as more trusted than economists. In the US, a survey asking a similar question also showed a lack of trust in economists explained Nobel Laureate Esther Duflo to an engaged audience of Georgetown students, faculty, and staff.

Duflo spoke at an event hosted by Georgetown University’s Initiative on Innovation, Development, and Evaluation (gui2de) and co-sponsored by the McCourt School of Public Policy, the economics department, and the Edmund A. Walsh School of Foreign Service. The event focused on Duflo’s recent book, co-authored by Abhijit Banerjee, titled Good Economics in Hard Times. In the book, Duflo and Banerjee review complex global issues and apply recent economic research to expand perspectives and identify possible economic solutions.

“We realized people were having policy conversations about many issues, that were at heart economic issues, like Brexit in the UK, trade, immigration…and yet these economic issues were debated with almost no reference to anything economists had to say, and we were wondering why,” said Duflo while describing the impetus for writing the book.

Economists have an expertise that can help inform and illuminate policy discussions through research and data, but only if the expertise is credible and trusted. Duflo touched on the need to rebuild trust, outlined themes that emerged while writing the book, and discussed how the themes can apply to rethinking economic policy.

The overarching themes of Duflo and Banerjee’s book comment on the role of financial incentives, the stickiness of the economy, the flexibility of preferences, and the role of dignity in the conversation of economic policy. Duflo and Banerjee analyzed the impact of financial incentives and concluded that they may not be as powerful of a driver in economic policy as generally assumed. Additionally, Duflo highlighted research to support that the economy is sticky and that people do not move or make significant changes in response to changes in economic opportunity as swiftly as economists have suggested, with the exception of those who move due to reasons like conflict. Another emerging theme was that preferences are more flexible than many might assume when discussing economic policy. Lastly, Duflo emphasized the important role of dignity as a recurring element in their research and findings. People want to find meaning and purpose in their work.

From the themes, Duflo outlined a few takeaways to consider in rethinking economic policy mentioning that economists should not be “scared of taxes at least from the point of view that they would slow down the economic machine.” Additionally, she expressed the need to make changes that address climate change and reconstruct the social protection system “to put dignity at the center of the system.”

Following the presentation, Duflo took questions from the audience. A McCourt student asked what advice Duflo could share for those pursuing careers in international development. Duflo, without hesitation, said that experience in a developing country is the first place to start. She emphasized that exposure in the field is important to have a more holistic understanding.

In October, Duflo and co-laureates Abhijit Banerjee and Michael Kremer were awarded the 2019 Nobel Prize in Economic Sciences “for their experimental approach to alleviating global poverty,” according to a press release from the Royal Swedish Academy of Sciences. Duflo is currently the youngest Laureate in Economic Sciences and the second female laureate to be awarded the prize.