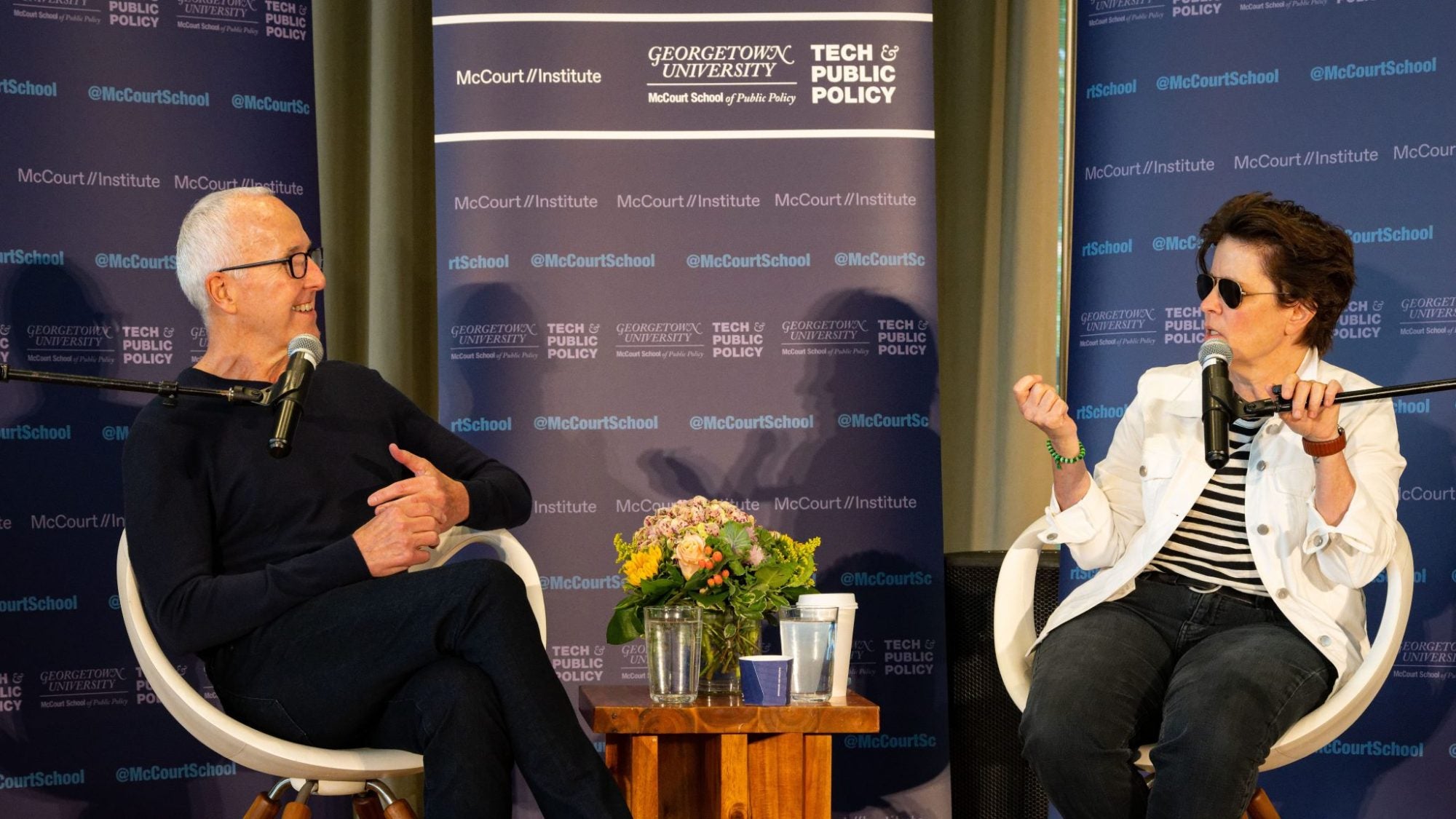 Frank McCourt (C’75) and Kara Swisher (SFS’84) discuss the importance of understanding the value of personal data, and the impact technology is having on democracy.

The McCourt School’s Tech & Public Policy program hosted Frank McCourt (C’75), founder of Project Liberty, the McCourt Institute and founding donor of the Georgetown University McCourt School of Public Policy, and Kara Swisher (SFS’84), host of the Vox Media and New York Magazine podcast “On with Kara Swisher,” to discuss how technology — and, specifically, social media — is impacting democracy. Below are a few highlights from their conversation:

Kara Swisher: One of my big issues is the centralization of power — there are very few companies that will allow users to retain their data — so the concept of the decentralized web is a great one. Can you expand on that more?

Frank McCourt: When you talk about wealth and power, really it is derived from the exploitation of people’s data so I think the most important thing is to focus on that data — who owns it, who uses it, who makes money from it, who controls it, who weaponizes it. It turns out our data has enormous value and we see that playing out with the richest companies in the world being built on it. I think with the next generation of technology, we have the opportunity to change things that are broken and fix them. I actually think that Web3 is coming in the nick of time for democracy.

Kara Swisher: Back when AOL was being founded, I raised the question of why they were using my data to generate income on an internet that I as a taxpayer helped to build. Our government has done nothing to protect our consumers [from this behavior], aside from Section 230. How do you change these things when there are so many incentives to keep them the way they are?

Frank McCourt: Our organization, Project Liberty, is not focused on regulation, it is focused on innovation. We do not have all of the answers ourselves but society has all the answers so we are really focused on collaboration because democracy is at risk. Web3 is a different type of internet than the one that existed when AOL was founded. That was an internet of data — whoever had the data had the value. Web3 is an internet of data and value. We are able to store data in a decentralized way, removing the ability for manipulation by larger platforms who are storing that data.

In 1993, we started a telecom company called RCN which allowed consumers to bundle together their phone, cable TV, and internet from one provider. But when they tried to bring their phone numbers over, the oligarchs of the time did not allow that transfer. We lobbied the government and the Telecommunications Act of 1996 was passed, and we had a telecom boom.

So, with Web3, think of your data as your phone number, think of apps as carriers, think of a world that is decentralized where you get to choose who has access to your data. This world is very possible.

Kara Swisher: Often we trade convenience for this access to our own data which makes us “cheap dates” to these internet companies. So how do you get people to understand the value of their data and what they are giving away?

Frank McCourt: Technology is incredible and connects billions of people, but it is also currently being used for terrible things.

“Civil society needs to understand how they’re being ripped off and the impact it is having on democracy.”

In order to change, I think there needs to be an alternative that is still just as convenient for everyone. It is similar to human physical migration — people don’t leave places they hate unless they know they have a safe place to go. The technology to do it is not the difficult part, but getting people to understand the value of their data and decide to migrate to this new platform will be quite challenging.