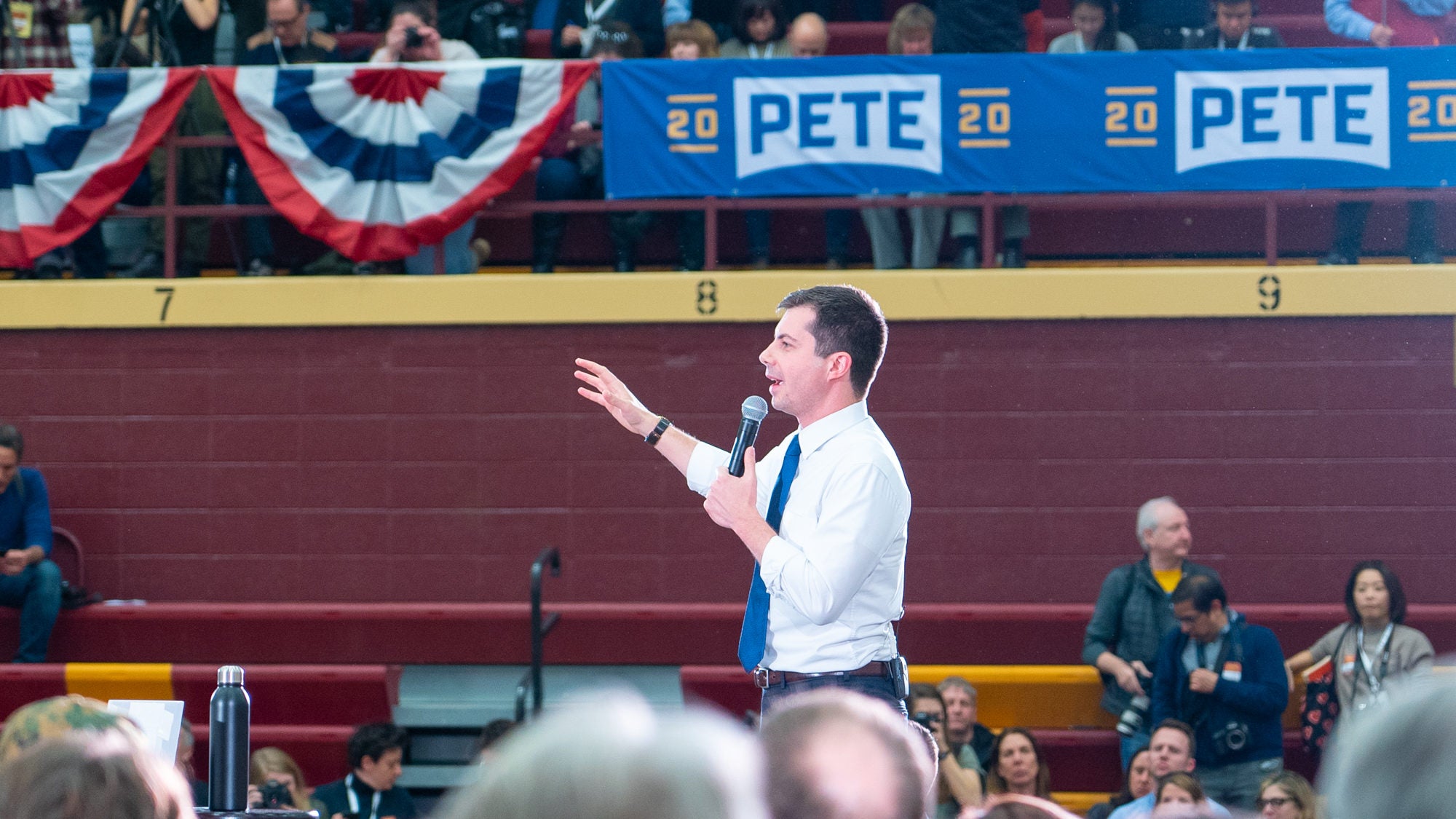 On Tuesday night, nearly 5,000 people tuned in to a live virtual conversation with former Democratic presidential candidate and former South Bend Mayor Pete Buttigieg. The event was part of the Institute of Politics and Public Service at the McCourt School of Public Policy (GU Politics) “Reflections on Running” series and was co-sponsored by Georgetown University’s College Democrats and Bipartisan Coalition.

GU Politics Executive Director Mo Elleithee (SFS ‘94) moderated the discussion and several students from Georgetown, as well as students from other institutes of politics across the country, asked the former presidential candidate questions about his experience running for president, the democratic election process, and how the current COVID-19 pandemic may impact national and global priorities.

“Nobody runs for mayor, of a city of any size, at least certainly a city the size of my community in South Bend, thinking two good terms here and it’s right to the White House,” said Buttigieg explaining that a few years ago he would never have guessed he would be running in the 2020 presidential cycle. Buttigieg believes the right process when considering whether to run is to determine if your skills and experience align with the position and the needs of the constituency.

“You reach a point as you go through that process of reflection, where you start to think, okay, if what I have to offer really does match what is needed in a unique way, then you start looking for indications about whether anybody else would agree, would become a supporter or follower, or whether this is just in your head.” Buttigieg went on to describe seeking counsel and insight from people, especially “truth-tellers” that are not afraid to deliver the hard truths and candid opinions.

On preparing to run, Buttigieg described two key elements to his strategy. The first was to increase his national profile by appearing in a wide range of media outlets from CNN, Fox News and TMZ to Snapchat and college radio shows. The second element was on-the-ground campaigning and meeting people face-to-face across the United States in various diners and backyards to build the support he needed.

“It was really that more than anything else that gave us the validation to keep moving forward,” Buttigieg explained as his dogs Buddy and Truman barked (perhaps in agreement) in the background.

Buttigieg is keen on reforming the Democratic nomination process and thinks it is important that the new approach allows candidates to gain greater support through face-to-face interactions with voters than through advertising.

“There are going to be a lot of calls for reform – and rightly so – given the problems that exist in the current Democratic nomination process,” he explained referencing the general issues raised about the caucus process and with diversity and representation in states that play an early role.

Elleithee, recognizing that many people believe the democratic system to be “flawed, broken, or fragile,” asked Buttigieg if he thought that the broader process of democracy is working.

“There are a lot of ways in which it is not and that was one of the themes of our campaign,” replied Buttigieg referencing issues his campaign was vocal about including reforms to the Supreme Court and the Electoral College. However, Buttigieg also highlighted “some real virtues in parts of the system,” recounting an experience on the campaign trail when a Trump supporter asked a question about social security out of genuine curiosity.

“There are ways to have that basic level of human encounter that I think are the heart of politics at its best,” Buttigieg explained, “that get filtered and strained and sucked out of the way we do this in the national level that I think are features of our political system that deserve to be preserved.”

McCourt student Kellen MacBeth (MPM ‘20) asked Buttigieg to share the most impactful positive and negative experiences on the campaign trail. Overall, Buttigieg said the experience was overwhelmingly positive and it was the little moments that would keep him going, but he often found online negativity alarming and noted that the general experience was physically challenging.

Later in the conversation, Buttigieg talked about the difference he noticed between media conversations and his conversations with voters. While reporters often asked him to weigh in on President Trump’s latest tweets, he said voters almost never did. One topic that did come up nearly daily with voters was mental health. When speaking with teacher unions, Buttigieg discussed mental health nearly as much as salaries.

Buttigieg, often focusing his campaign message on generational change, reflected on the role of identity in politics.

“[Identity] was something we thought about a lot,” said Buttigieg. “Especially because there was no playbook for how to run for president as a candidate of the LGBTQ community.”

He aimed to learn from other historical campaigns such as President Obama and Hilary Clinton explaining that he found it important to proudly represent the LGBTQ community while not letting it wholly define him and to present a message that was relatively universal.

“But, what I realized was that being universal doesn’t mean washing away differences of identity,” said Buttigieg explaining that sharing his lived experience helped establish a basis for solidarity. He recognized the challenging balance and was cautious to avoid comparing experiences.

Buttigieg described another challenge he faced and how he navigated the challenge by following time-honored advice to be his authentic self.

“There are a lot of expectations and so there was a lot of commentary on whether I was the right kind of gay,” said Buttigieg. “All I could do in response to that was say that I was the only kind that I knew how to be.”

Impact of the COVID-19 Pandemic

In challenging moments, Buttigieg pointed out that physically gathering is the first thing we want to do and the last thing we can do right now.

“We have to remember that this is a moment that will really test our imagination about how to pitch in and help others,” said Buttigieg.

Tuning in from Massachusetts, Stacie Hartman (SFS ’21) asked Buttigieg how he thinks COVID-19 may impact national and global priorities and how the next administration should re-shape the US foreign policy agenda in the wake of the crisis.

“I think this could be a dress rehearsal for climate change in addition to being a horrible situation…in its own right,” said Buttigieg commending the salient question while acknowledging the urgency needed to address the current pandemic. “It also foreshadows, in very specific ways, the pattern of problems and needed solutions that is true when it comes to climate.”

He pointed out the parallels such as relying heavily on the science community, examining economic structures, and the pervasive impact climate change presents regardless of borders and requiring global coordination. Referring to the current pandemic as “the biggest national security crisis of our lifetime,” Buttigieg pointed out the two hospital ships the military recently deployed to support the health systems while suggesting it may be time to rethink our military-to-military relationships and U.S. defense priorities while acknowledging there are no easy answers.

The former candidate is still processing a lot and reminded the audience that, while a lot has happened, it has only been a few weeks since he dropped out of the race. For more insights and reflections from former candidates, members of the media, and political operatives, follow @GUPolitics on social media.