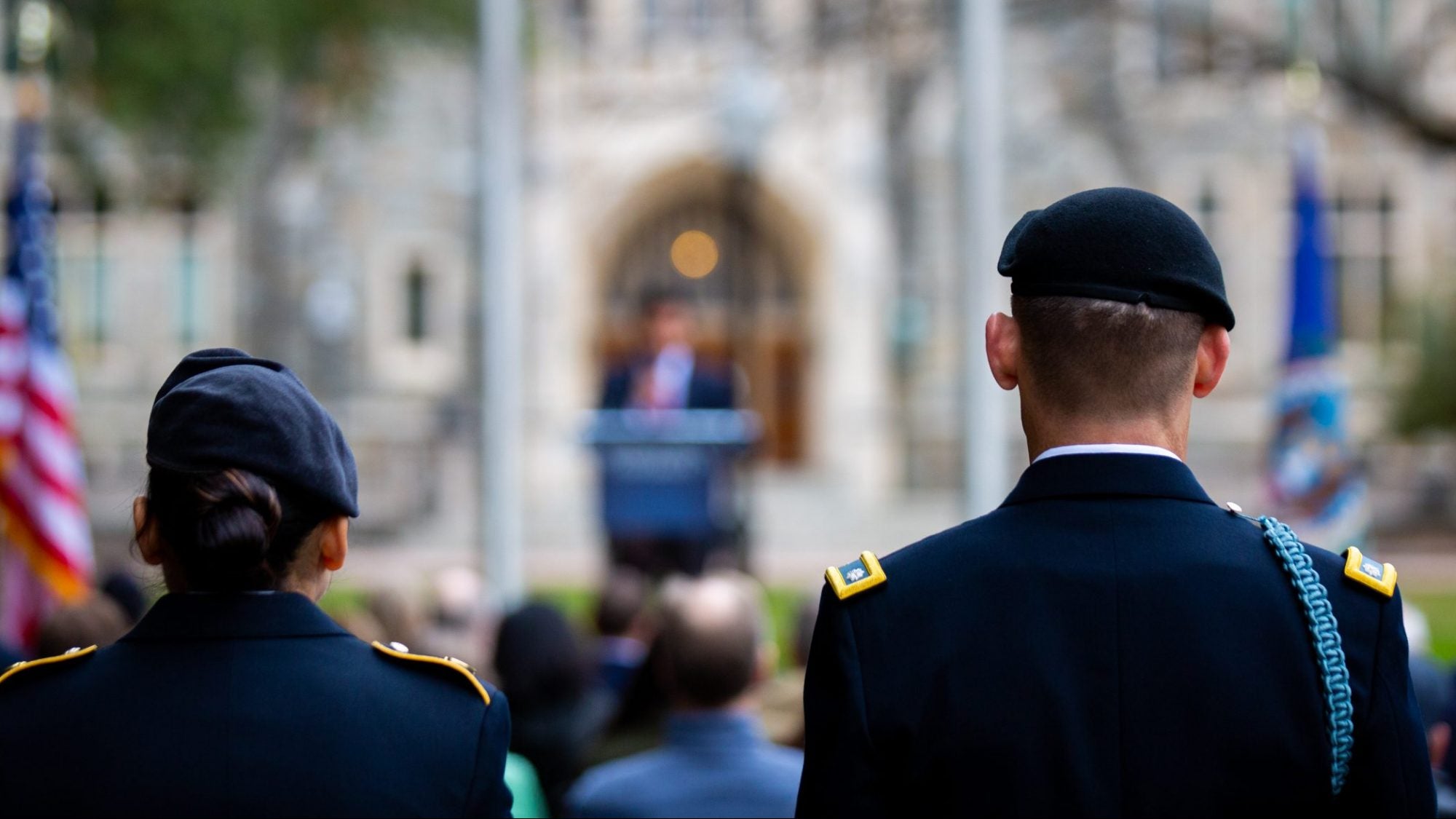 In May of 2021 the McCourt School announced the creation of the Craig Newmark Veterans Scholarship Fund, which aims to increase access to a McCourt School education for active-duty servicemen and women, veterans, and military-connected students, and deepen the impact they have in public policy.

Today we are excited to welcome these four scholars to the Hilltop!

“I’m quite excited to be surrounded by people who share a very sincere need to have an impact and make a positive difference in our world.”

Originally from Grand Rapids, MI Samuel Grantz received his bachelor’s degree in international relations and logistics management and marketing from Central Michigan University. Shortly after graduation he deployed as an infantry squad leader with the Marine Corps Reserves to Helmand Province, Afghanistan. During the deployment Grantz led security patrols south of Lashkargah and conducted key leader engagements with local civilian and government officials.

After returning to the U.S., Grantz took a position with Chemonics International forecasting and  managing a malaria medicine supply chain just as COVID-19 was breaking. It was through this work and his travels abroad, both within and outside of the military, that he found his passion for international development work.

When he joins the McCourt School community this fall as an Master of International Development Policy student, Grantz hopes to expand his knowledge of quantitative skills to help him make data driven policy decisions in the future.

“I’m looking forward to the discomfort of starting something new, challenging my thinking, and meeting new people!”

Growing up in Woodbridge, VA Lauren Augustine considered herself a “fifth-generation DMV local” and has long aspired to complete her education at Georgetown.

Augustine is a proud first generation college graduate and earned her bachelor’s degree in International Relations and Russian Language from Virginia Tech. Following graduation, she joined the Army and flew unmanned aerial vehicles for the First Infantry Division in Kansas and Iraq.

After returning to the U.S., Augustine spent nearly a decade in the government affairs world advocating on behalf of veterans, their families, and the services and benefits provided by the VA and Department of Defense.

As she begins her McCourt journey Augustine is looking forward to gaining some energy and excitement thanks to new ideas and a new network, the discomfort of starting something new, challenging her thinking, and meeting new people.

“I’m so excited to see the different organizations McCourt will be partnering with and how we will be able to help them find practical and effective policy solutions.”

Born and raised in Southern Minnesota, Shyla Alam received her Bachelor of Arts in political science and global studies from Hamline University in 2019 while completing her tour of duty in Kuwait.

After an internship with the International Institute of Minnesota, Alam found herself drawn to issues related to migration, environmental, and social policy. During her time at McCourt, she hopes to expand her knowledge of these subjects and build on her quantitative abilities to better understand how to interpret data and use evidence-based research to become a better policymaker.

“I look forward to connecting with my cohort and the community of passionate leaders as I begin my career at McCourt.”

As a Harry S. Truman Scholar, he was drawn to the McCourt School because of its history as a community of evidence-based problem solvers who affect positive change on local and international levels.

During his time at McCourt, Manson hopes to bolster and develop his analytical and development policy knowledge while pursuing a Master of International Development Policy. In addition, Manson looks forward to connecting with his cohort and the community of passionate leaders as he begins his career at McCourt.