Bill Clinton: ‘America Won’t Be America Anymore’ if Us Versus Them Mentality Continues

Former President William J. Clinton (SFS’68) warned about the dangers of Americans having an “us versus them” mentality during a keynote address yesterday at Georgetown. 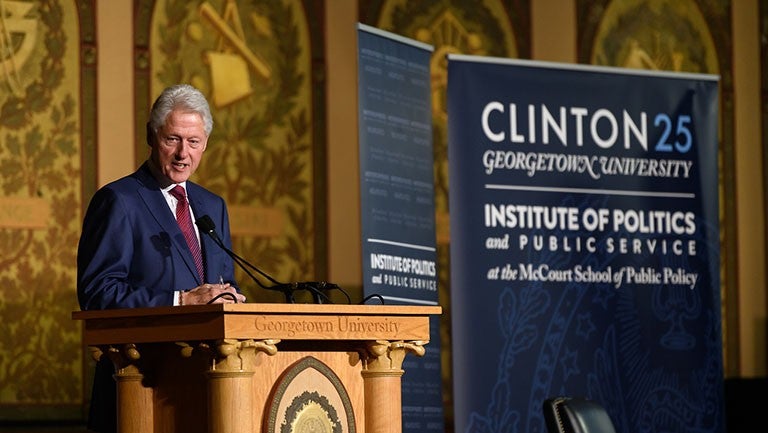 Former President Bill Clinton gives the keynote address at the “Clinton 25: Georgetown Reflects On The Vision Of Bill Clinton,” hosted by the McCourt School of Public Policy and its Institute of Politics and Public Service (GU Politics).

Clinton spoke as part of a three-day university symposium examining the vision that drove his campaign and presidency 25 years after he was elected and nearly 50 years after he graduated from Georgetown.

“We at least should be able to treat each other like human beings without assuming the worst,” said Clinton. “This us versus them thing is the most dangerous thing we’re confronting, but as long as people are rewarded for it politically it will continue.”

He urged Americans to dialogue with individuals with whom they may disagree and lamented what he called the “gutting” of the Voting Rights Act by the U.S. Supreme Court.

PUSHING TOWARD HOPE
“How many voters do we have to disenfranchise before we’re not American anymore?” he asked the Georgetown audience.

He said the “us vs. them” mentality he described has been prevalent throughout history, such as the Jim Crow laws passed after the 15th amendment which gave African Americans the right to vote but has recently gained ground.

“Think about your own life,” he said. “You wake up every day and inside your spirit is like a bunch of scales. Some days the scales weigh toward hope. Some days it’s weighted toward fear and resentment. That’s what the country’s like. You’ve got to keep pushing toward hope without pushing it so far you’re hopelessly naïve and foolish and vulnerable. But if you let it give in to us versus them, at some point, America won’t be America anymore.”

CLINTON 25
Hosted by the Institute of Politics and Public Service (GU Politics)at Georgetown’s McCourt School of Public Policy, the symposium included sessions with former campaign and administration officials and other guests looking back on Clinton’s journey from the Hilltop to the White House, his time as President and his vision for the country and the world.

“Clinton 25: Georgetown Reflects On The Vision Of Bill Clinton” began on Friday, Nov. 3, with other events happening on campus Sunday and Monday.

GU Politics and its campus partners hosted panel discussions, movie screenings, original videos and exhibitions on the 42nd President of the United States.

“There’s nothing like coming back to Georgetown,” Clinton said before the symposium began. “I’ve often said that I don’t think I could have become President if I hadn’t studied there. I’m grateful for the opportunity to return and continue our discussion on what it means to live a life of public service – I believe it’s more important than ever.”

INSIDE ‘THE WAR ROOM’
The symposium kicked off on Nov. 3, the 25th anniversary of Election Day 1992, with an “election night watch party” featuring broadcasts from 1992 in real time.

On Sunday, GU Politics convened strategists from Clinton’s 1992 campaign, including Paul Begala, James Carville, Mandy Grunwald and Rodney Slater, to look back at the dynamics, messages, strategies and tactics that helped elect the first Democratic president in nearly two decades.

The conversation followed a screening of “The War Room,” the critically acclaimed documentary about the 1992 Clinton campaign.

VISION FOR AMERICA
Monday’s events also included a series of discussions exploring Clinton’s vision for America and the world, and his view of public service and how it framed his presidency.

The Baker Center sponsored the panel called “Vision of Leadership and Public Service” with the former chiefs of staff.

CLINTON AT GEORGETOWN
A 1968 graduate of Georgetown’s School of Foreign Service, former President Clinton has a long relationship with the university.

As governor of Arkansas, he delivered the 1980 commencement address on campus. In 1991, as a Democratic candidate for president, he presented three “New Covenant” speeches on “Responsibility and Rebuilding the American Community,” “Economic Change” and “American Security.”

And as President-elect, he addressed the foreign diplomatic corps from the steps of Georgetown’s historic Old North building.

In 2013, he delivered the first of four“Clinton Lectures” at Georgetown exploring the people, events, lessons and guiding principles that have shaped his career in public service.

The lectures examined the framework for a lifetime spent championing an idea espoused by his Georgetown professor Carroll Quigley: that tomorrow can be better than today and that every one of us has a personal, moral responsibility to make it so.

His keynote address at “Clinton 25” was the final speech in that series. 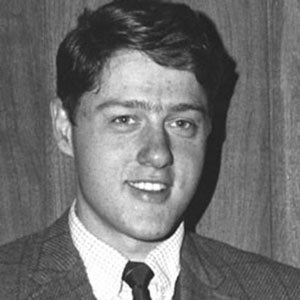 INSPIRING THE NEXT GENERATION
During his time at Georgetown, Clinton served on the student council and as class president. As an undergraduate at the university, he also worked for Sen. William Fulbright (D-Arkansas), then chair of the Senate Foreign Relations Committee.

The Phi Beta Kappa and Kappa Kappa Psi member earned a Rhodes Scholarship to attend the University of Oxford after he graduated from Georgetown.

“As a Georgetown undergrad, I witnessed first-hand the energy and excitement President Clinton’s candidacy brought to the Hilltop, and his vision inspired me to dedicate the next 20 years of my life to being a part of the political process,” GU Politics executive director Mo Elleithee (SFS’94) said in October. “The 25th anniversary of his election is the perfect opportunity to reflect on that time, and harness it to inspire the next generation of leaders to public service.”

THE PROMISE OF POLITICS
Through its Fellows program and other programming such as speakers series, career events and mentorship, GU Politics connects and empowers students and the community in an effort to improve and reimagine politics and public service and reaffirm its promise.

Founded in the fall of 2015 as a part of the university’s McCourt School of Public Policy, GU Politics programming is open to the entire Georgetown community.