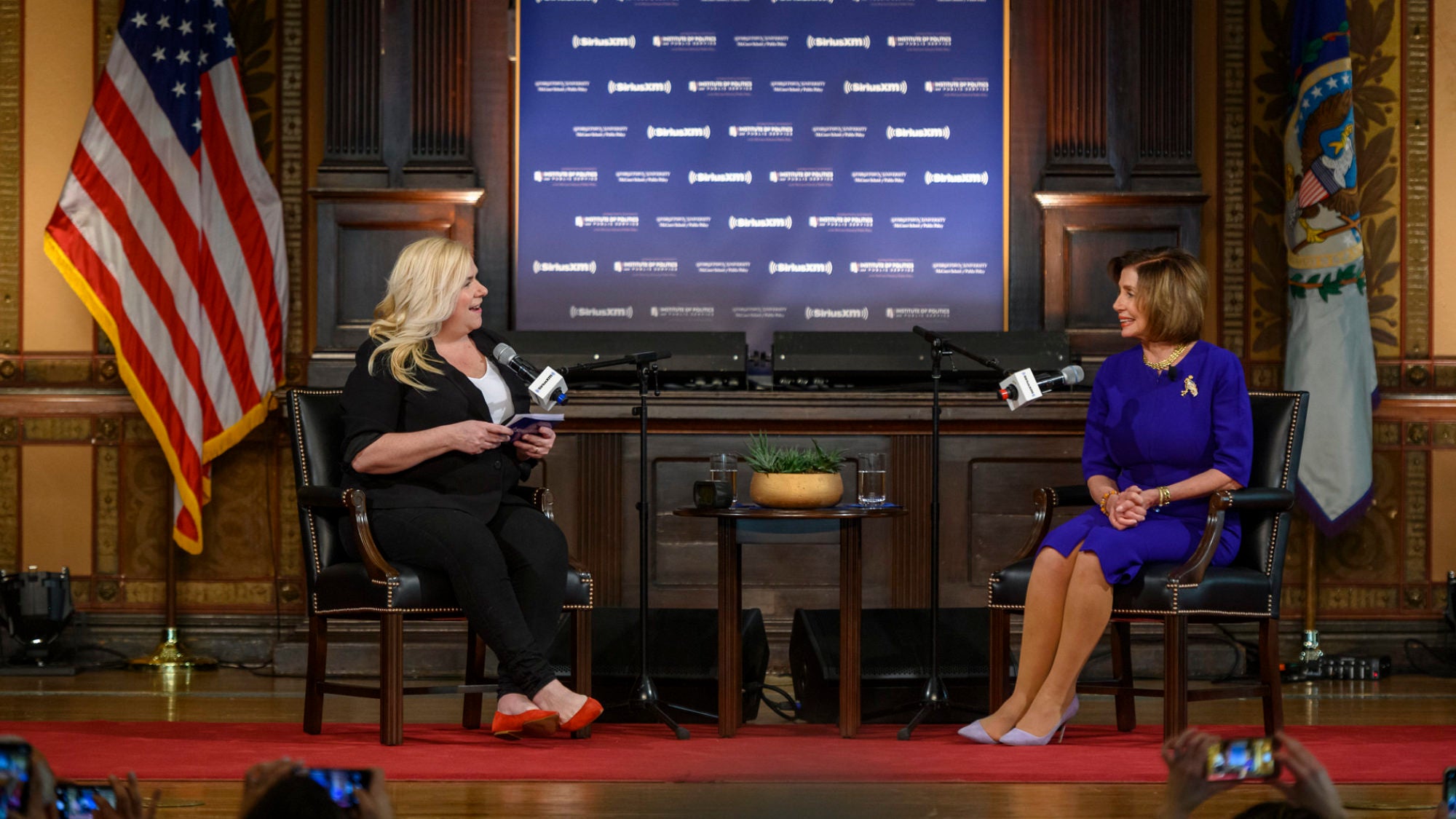 This year marks the 100th anniversary of the 19th Amendment, an amendment that established women’s right to vote in the United States. In celebration of the anniversary and Women’s History Month, the McCourt School’s Institute of Politics and Public Service (GU Politics) and SiriusXM hosted a discussion earlier this month with the first female Speaker of the House, Nancy Pelosi and Julie Mason of SiriusXM’s POTUS Channel.

Dean Maria Cancian kicked off the event by highlighting the importance of elevating all voices in policy while spotlighting McCourt’s Women in Public Policy Initiative (WIPPI) and first-year MPP student Morgan Sasser (MPP ‘21), who took the stage to introduce Speaker Nancy Pelosi and SiriusXM’s Julie Mason. Mason opened the conversation noting that while the 19th Amendment was passed before the 1920 presidential election, it took years for women to turn out to vote and that there was some tension between suffragists and abolitionists. Speaker Pelosi recalled hearing about a newspaper headline that said women were given the right to vote. “No such thing – we weren’t given anything,” said Pelosi. “We marched… and sacrificed for decades in order to achieve the right to vote.”

Throughout the conversation, Pelosi discussed the life of suffragette Jeannette Rankin, offered advice to women, shared insight on some of today’s most critical policy topics, and answered questions from Georgetown students.

Speaker Pelosi described her first meeting in the White House as the first female Speaker of the House, “I realized this was unlike any meeting I had ever been to at the White House before.” In that meeting, she said she suddenly felt squeezed in her chair as she realized that suffragettes, like Susan B. Anthony and Sojourner Truth, were all sitting in the chair with her. “I could hear them say: at last, we have a seat at the table,” Speaker Pelosi explained as the audience broke out in applause.

While reflecting on the 19th Amendment, Speaker Pelosi explained how critical it is for women’s equality that women have a voice and representation in all sectors. Her advice to women is: “Have confidence and know your power.” She commended Dean Cancian and McCourt for supporting the Women in Public Policy Initiative and encouraged women to stay engaged and remember the strength and value of their experience.

Pelosi commented on the number of women that ran for president this cycle, mentioning that the field was very large suggesting that it made garnering support difficult while adding that a lot of men also have also dropped out. She noted the achievements that women have made in politics including Hillary Clinton becoming the first female presidential nominee of a major US political party while acknowledging there is still much work ahead for equal representation of women in politics. “I thought we’d have a woman president long before we had a woman [as] Speaker of the House,” said Pelosi. “Because if you want to talk about a glass ceiling, I’ll tell you about a marble ceiling.”

She shared additional advice to the women in the room and for those tuning in to the broadcast, “When you put yourself out there, you have to believe that you are the one that can do the job.” Speaker Pelosi said that people tend to think that education and healthcare are women’s issues, and she described how she advocates for women in Congress to have a voice and involvement with committees focused on all topics like security issues. “Every issue is a women’s issue — women take ownership of it all because that’s what it takes to be the president of the United States,” Pelosi explained as she summed up her thoughts on the topic. “I have a motto — we don’t agonize, we organize.”

Speaker Pelosi is optimistic that a woman will be president, she just is not sure when. Before moving to questions from the audience, Pelosi made a point to say that she will enthusiastically embrace (or elbow bump) whoever becomes the Democratic nominee. Mason then opened up for questions, and several members of the Georgetown community asked about a range of topics including bipartisanship, campaign finance, and journalism.