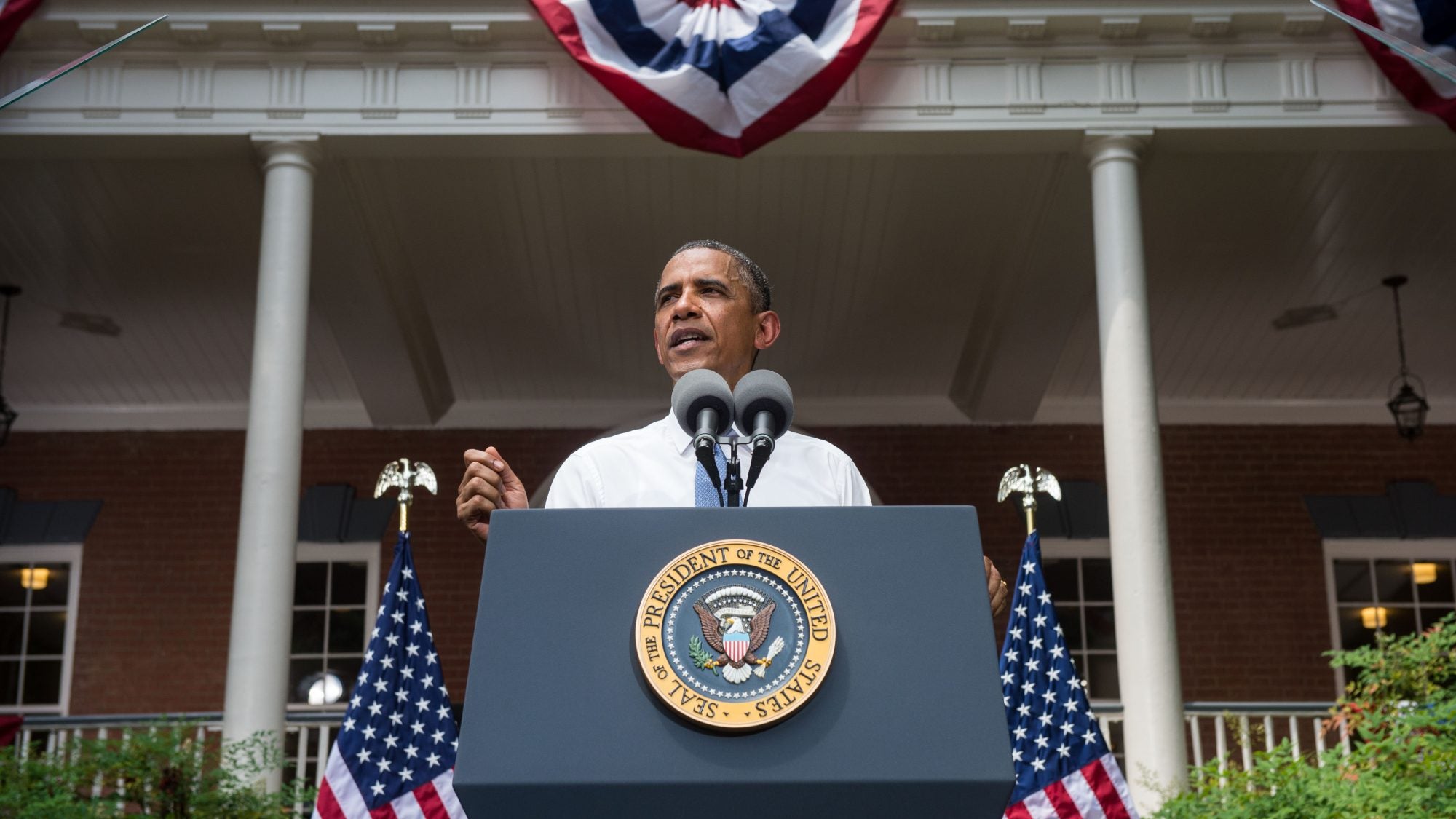 Title: These 4 historic presidential addresses on policy were announced at Georgetown

In honor of Presidents Day, the McCourt School looks back at on-campus policy addresses from former commanders-in-chief.

Since 1796, nearly a dozen U.S. presidents have visited Georgetown’s campus. The university’s unique location at the center of the policy world has made it a particularly desirable place for presidential candidates and sitting presidents to amplify their policy positions on a number of issues — from the environment and international peace to national security and defense.

In celebration of these special moments and in recognition of Presidents Day, the McCourt School took a deep dive into on-campus policy addresses from former commanders-in-chief.

Exactly one month after defeating Republican Barry Goldwater in one of the largest landslides in U.S. history, former President Lyndon B. Johnson was awarded an honorary degree from Georgetown as the university concluded its 175th anniversary celebration. President John F. Kennedy, who was assassinated in 1963, had originally been scheduled to speak and was presented a posthumous degree during the ceremony in McDonough Gymnasium.

Amidst the Cold War, Johnson used his acceptance speech to remark on what he referred to as the “central problem of today’s world” — the interdependence of nations. He called for “increasing the unity of Europe as a key to Western strength and a barrier to resurgent and erosive nationalism,” which was a direct commentary on the division in Germany and the Soviet Union’s dominance over its eastern European allies and East Berlin.

Johnson announced America’s plan to move forward with its allies to form a nuclear fleet, though he asserted a willingness on behalf of the Atlantic nations to “discuss any proposal with the Soviet Union which might increase the chances of a lasting peace.”

Just a few months before announcing his candidacy for president, George Herbert Walker Bush addressed the Georgetown campus community in Gaston Hall. Former President Bush spent much of his speech attacking the Carter Administration’s foreign policy as one that “zigged and zagged from being tough one day, to soft and mushy the next.”

“The United States must not allow a nuclear weapons treaty to serve as protective cover for Soviet adventurism around the world,” said Bush. These remarks came five months before President Carter signed the second Strategic Arms Limitation Talks (SALT-II) agreement with Soviet Union leader Leonid Brezhnev — a treaty that was widely criticized in the U.S.

Though the “George Bush for President Committee” had already formed and was seeking donations, Bush did not declare his intent to seek the 1980 Republican presidential nomination during his speech. However, when asked by a student if he was a candidate, he replied that he “had not made a super-final decision but was keenly interested in seeking the nomination.”

Speaking to a capacity crowd in Gaston Hall, former President Bill Clinton (SFS‘68) announced the National Missile Defense (NMD) program would not move forward, effectively leaving deployment of a national missile shield to his successor. The program was developed as part of the Clinton Administration’s comprehensive national security strategy to detect and prevent ballistic missile threats from other nations before they reached targets in the U.S.

“Strategic stability, based on mutual deterrence, is still important, despite the end of the Cold War,” said Clinton, referring primarily to Russia. Though he found the NMD program to be promising and affordable to justify continued development and testing (for which his administration spent approximately $5.7 billion), Clinton pointed to a lack of sufficient information about the technical and operational effectiveness of the NMD system.

This speech marked Clinton’s 12th visit to Georgetown’s campus in his eight years as president.

In a speech on the steps of historic Old North, former President Barack Obama presented his comprehensive plan to reduce carbon pollution, prepare the U.S. for the impacts of climate change and lead global efforts to fight it. He spoke directly to the Hoyas in attendance, saying, “I refuse to condemn your generation and future generations to a planet that’s beyond fixing.”

Obama underscored the bipartisan passage of the Clean Air Act of 1970, which was signed into law by President Richard Nixon and later strengthened by President George H.W. Bush. He also called on the Environmental Protection Agency to regulate power plants, citing they produced 40% of America’s carbon pollution.

Obama’s speech laid out a three-point plan to take bold action in the fight against climate change, which the White House released to the public that same day. “Here at Georgetown, I unveiled my strategy for a secure energy future,” he said.

A special thank you to Georgetown University Archives for their support in developing this story.