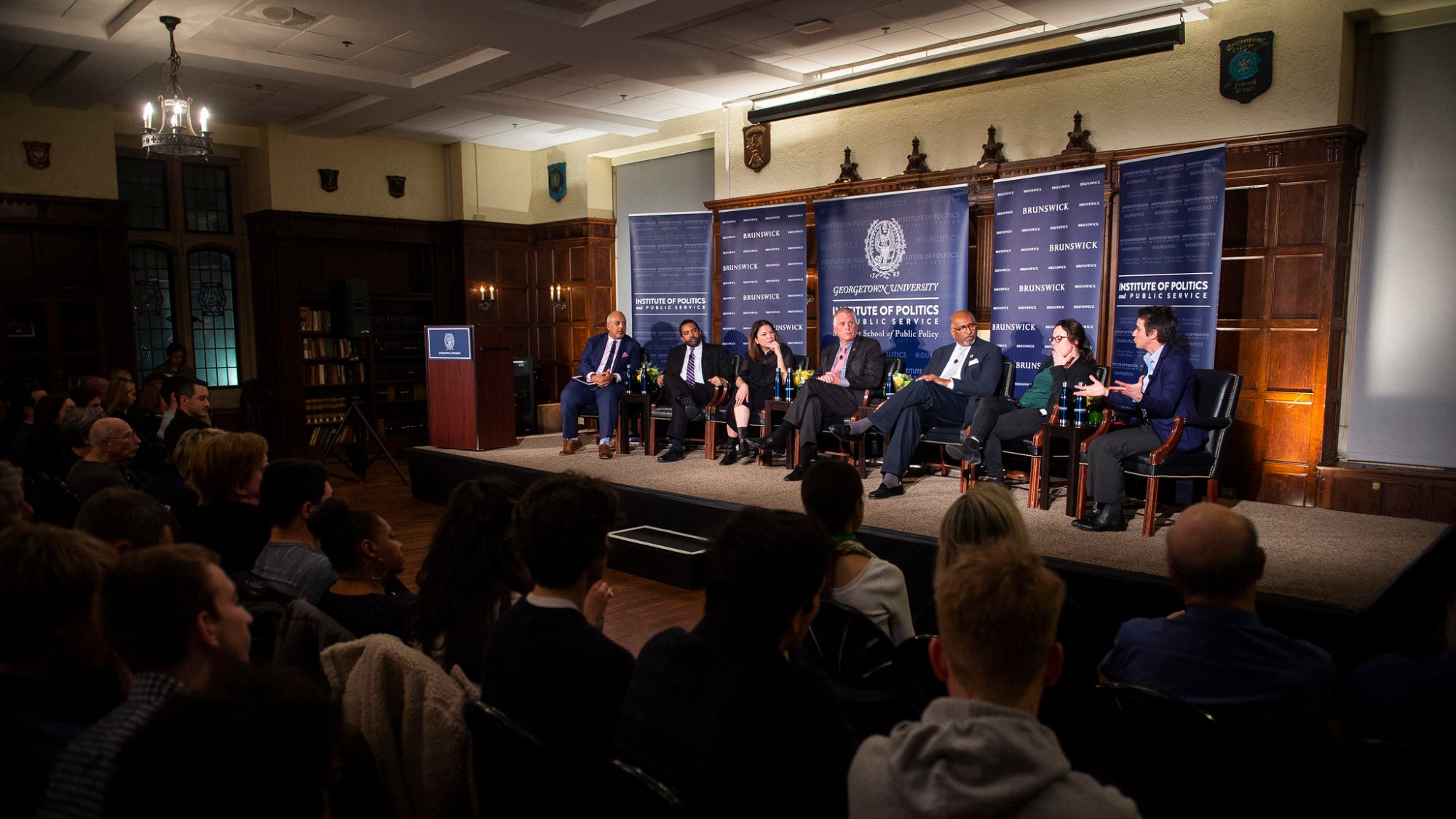 Panel Shares Insights on Campaign Strategies and the Road to 2020

In advance of Super Tuesday, McCourt student Layla Oghabian shares a recap and reflections from a panel discussion on 2020 campaign strategies and election coverage.

Last week, students filled Copley Formal Lounge for a panel discussion examining the current state of the 2020 presidential races and what to expect as Election Day approaches. The panelists, each with different perspectives and backgrounds, touched on the democratic nomination process, coalition building, media coverage, President Trump’s re-election strategy, and more.

With Super Tuesday right around the corner, McCourt student Layla Oghabian (MPP ’21) attended the timely event hosted by the Georgetown Institute of Politics at the McCourt School and the Brunswick Group.

“My key takeaway from this event is that overconfidence is dangerous and can lead to low voter turnout,” said Oghabian. “People stayed home in 2016 because they were sure Trump would lose, but we can’t be sure of anything this time around.”

Read Layla Oghabian’s event recap and her takeaways from the panel discussion below.

Many of the panelists believe that Senator Bernie Sanders will be the Democratic nominee. Amy Walters explained that the candidate who has historically won the nomination has won either Iowa or New Hampshire or both. Given that Sanders has performed well in both Iowa and New Hampshire, she predicts that Sanders will prevail. I agree with her. Last semester, in my campaign management course with professors Scott Mulhauser and Mike Steel, I learned that the nominee usually wins one of these states.

However, Johnathan Burks said it was premature to predict Sanders as the nominee. “We’ve only had about 2% of the Democratic delegates actually elected at this point so there is a ton of work that has to be done,” said Burks explaining that Sanders needs to build a broad coalition that can win a majority of the delegates. Burks also said people should be “appropriately cautious” about their confidence in what happens next reminding the room that many people were confident in 2016 that Trump would not win the presidency.

Michael Steele, on the other hand, believes that Sanders will win the nomination and the presidency. According to Steele, voters see Sanders and Trump as two sides of the same coin –– anti-establishment and a disruption of the system–– explaining that both candidates want to deconstruct the administrative state. To win the election, Steele thinks it will ultimately come down to who the voters like more. At the end of the day, Steele believes voters will favor  Sanders slightly more than Trump because voters do not like what they have seen after three years of Trump in office and Sanders is a continuation of the disruption, but in a more likable fashion.

The panelists agreed that the election will be won on the margins. A presidential election has not been won by a landslide in recent history, and this election will likely be no different. Walters pointed out that in the current landscape anything beyond a two-point victory is considered a landslide. If Democrats are to prevail, they must build a broad coalition and have message discipline. Governor McAuliffe is optimistic that Democrats will win, but he is being cautious in his prediction so he doesn’t make the same mistake as others did in 2016. McAuliffe joked that “if there is any party that can screw it up, it is the Democratic party.” According to McAuliffe, the difference from 2016 to 2020 is that people are not going to stay home on Election Day. He highlighted the high voter turnout in the 2018 midterm elections as an example.

Too much could happen between now and Election Day to change the race and only time will tell. The overarching takeaway is that the only way for the best candidate to win is if people head to the polls and exercise their right to vote come November.