The McCourt School of Public Policy mourns the loss of Alice M. Rivlin, a visiting professor at McCourt and our predecessor the Georgetown Public Policy Institute from 2003 to 2016. 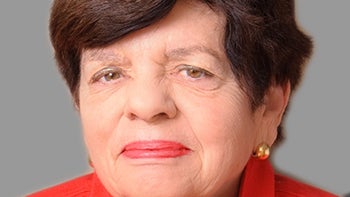 The McCourt School of Public Policy mourns the loss of Alice M. Rivlin, a visiting professor at McCourt and our predecessor the Georgetown Public Policy Institute (GPPI) from 2003 to 2016. She was the founding director of the Congressional Budget Office and former chair of the Federal Reserve.

“To those of us who live public policy, Alice Rivlin was a star. The scope of her leadership roles, the impact of the institutions she built, and the range of policy decisions she influenced are truly awesome,” said Judy Feder, professor at the McCourt School and former dean of the Georgetown Public Policy Institute. “Working with Alice always made me want to do — and be — the very best I could; and at GPPI/McCourt, I know she had that effect on every aspiring policy leader able to get a seat in her class. It’s insufficient to say that Alice will be missed. She certainly will be. But I know I and many others will always have her with us — as an inspiration and a friend.”

Over the years, Rivlin taught hundreds of McCourt School and GPPI students in classes like “National Economic Issues” and “The Political Economy of Cities.” In 2017, Rivlin served as the McCourt School commencement speaker, congratulating graduates “on choosing public policy as a discipline and a career especially in this tumultuous and trying time in the public arena.”

Tributes to Rivlin from Hoyas across social media

Taking Alice Rivlin’s class on budget policy (and hearing her stories about a remarkable career), was one of the most memorable parts of my grad school experience @Georgetown @McCourtSchool. RIP. https://t.co/XzQAiAHHN2

I was lucky enough to take her class at @McCourtSchool “The Political Economy of Cities” and her stories were unparalleled. Being in her class is one of my favorite grad school memories. https://t.co/AyB4HDscKQ

Alice Rivlin was more than a budget maestro, she’s a Washington, DC institution. She was a policy wonk, larger than life @Georgetown @McCourtSchool & I’m forever grateful to have known her. Alice Rivlin’s legacy lives in all of us she mentored. RIP my dear friend. https://t.co/ZcJThKaLEJ