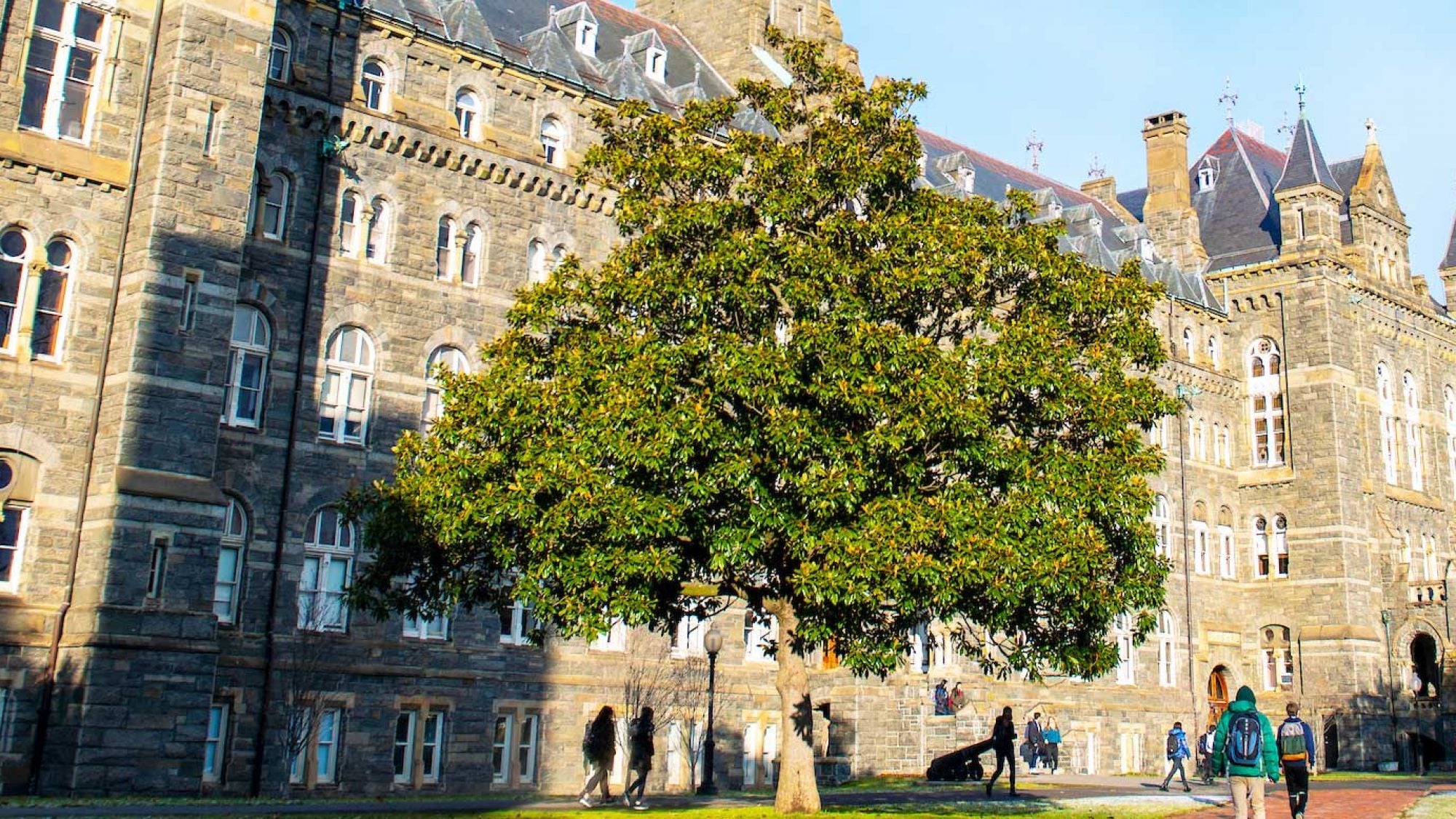 The McCourt School community mourns the loss of Judge Robert Katzmann, a former member of our faculty at what was then known as the Georgetown Public Policy Institute (GPPI). Judge Katzmann also taught at Georgetown’s Law Center and in Georgetown’s government department.

Judge Katzmann began as an adjunct faculty member at GPPI in 1987 and joined as a tenured professor in 1992. He chaired the first-ever dean’s search at GPPI and taught courses in Administrative Process and The Courts & Public Policy. You can read more about the remarkable life of Judge Katzmann in the New York Times.

Below we share reflections about Judge Katzmann from members of the McCourt School community:

Bob Katzmann was an amazing person. Shortly after I arrived at Georgetown, I met him for the first time. It was immediately clear he was both kind and smart. He was also soft-spoken and his hair was a bit of a mess. I had him pegged as a classic ivory tower academic. I pictured him holed up in his office and me needing to pull him into the real world, if only to eat.

I was right about him being smart and kind, but so wrong about him being separate from the world. In fact, he may have been one of the most engaged people I have ever met. Bob was deeply involved, deeply influential while being truly decent all the way through, all the time. He was a model in so many ways. His work speaks for itself, whether as distinguished scholar of the courts or as a trusted advisor to Senator Moynihan or as a judge. The way he did his work was as impressive, so kind, so thoughtful, so thorough. I had the privilege of working with him particularly closely on the Bernstein Lectures that he lovingly curated. He was organized, persistent and effective. And my favorite part was when he would introduce the speaker, often someone he was close to. The facts were there, of course, but Bob could capture the essence — the best — of the *person* he was introducing. So even as few were as masterful of the case law and the policy involved in Bob’s impressive professional life, the fact that he could grasp and appreciate and explain the humanity of the people he was working with was the thing that always put Bob on a higher level.

I — and the country — will miss this great man.

As a professor at Georgetown, Judge Katzmann brought his kind and welcoming demeanor to students, inspiring us to make better governance and policy through sound reasoning. He was a good man who possessed the unique combination of high intellect with respectful humility that enabled him to guide students to achieve and build upon their own wisdom and learning. He was a credit to every institution with which he was affiliated. As his student, indeed it is the rare day during my work as an antitrust lawyer at the Federal Trade Commission that I do not rely on the skills and knowledge he taught me while his student at Georgetown. Judge Katzmann will be deeply missed, but thankfully his work and scholarship live on in the students he has taught and inspired.

Bob Katzmann was an early member of the community that the McCourt School has become, recruiting me to its deanship just before his appointment to the court. Bob’s enthusiasm for all that public policy education can and should be, especially at Georgetown, was contagious. And the breadth and depth of his contributions to just and effective public policy were inspiring.  The nation lost him too soon, but the knowledge and wisdom he brought to our school–sprinkled with a healthy dose of humor, warmth and humility–remain with McCourt forever.

I was stunned and deeply saddened to read of Judge Robert Katzmann’s passing last week. I best knew him before he ascended to the Federal bench as Dr. Katzmann, a professor and instructor of a series of classes at the (then) Georgetown Public Policy Institute. Dr. Katzmann too was instrumental in bringing together the Georgetown Public Policy Review, a student-refereed public policy journal that continues to publish to this day.

I remember his classes very well as he provoked lively debate, and more importantly, deep and diverse critical thinking about public policy. These lessons have lasted me a lifetime, and I am very thankful for them. But what I remember most about Dr. Katzmann in this setting was how, in spite of his many incredible accomplishments outside the classroom, he was so very welcoming and open to all of us as his students. He was an excellent teacher.

I was a direct beneficiary of Dr. Katzmann’s commitment and passion to teaching and am forever indebted to him for that. I extend my heartfelt condolences to his family.

Few professors have had the extraordinary impact on public policy and political institutions that Bob Katzmann did. Even before becoming a federal judge, he worked tirelessly and creatively to strengthen ties between the federal judiciary and other branches of government. Bob was always a bridge-builder. Later, as a judge on the 2nd Circuit Court of Appeals, Bob made policy directly through many important decisions. He also promoted two causes dear to his heart with persistence and imagination – legal representation for immigrants and civic education for young people.

At Georgetown, as a colleague, Bob was always eager to help, quick to praise, and reluctant to blow his own horn.  He enjoyed introducing people over lunch or dinner.  In academia, as in politics, he brought people together and hoped for the best.  His role was to light the spark.  He fervently believed that people with different points of view could find some common ground, if given a nudge.

Bob was a man of extraordinary decency, integrity, and high motivation, brimming with public spirit and compassion.  We were most fortunate to have him on our faculty during the 1990s.  And I’ve been truly fortunate to be one of his many friends.

Judge Bob Katzmann was a monumental American treasure. He was a man of powerful intellect and deep knowledge of law and policy, but most importantly what struck me about him was his magnificent integrity, decency and humility. As a professor, he touched so many lives and personified what a servant leader is all about: caring, patient and someone who took the time with all of us to share his deep passion for ensuring that our nation became more just and equitable for all. I was blessed to know Bob Katzmann, a man who leaves a rich legacy and someone who will be deeply missed.

Bob was one of the kindest and most gentle persons I have ever met. When I was a struggling graduate student — and Bob was running a think tank, holding multiple academic appointments (Brookings, Georgetown), shepherding Supreme Court nominees through the halls of the Senate, and writing path-breaking books — he would invite me into his office and offer to hear my personal and professional woes. He listened carefully, and spoke thoughtfully, unhurried. His advice, like his judicial rulings, was both practical and wise. Today and in the future, thousands of Americans (or aspiring-to-be Americans) will be able to say “Thanks, Justice Katzmann, for all you have done to make our lives better.

My relationship with Judge Katzmann began 27 years ago, when I was a Georgetown graduate student and he was a professor teaching classes in public policy, government, and law. This was in addition to his work at Brookings and his role as President of the Governance Institute. For public policy students considering a career in law, he was really the go-to teacher. Having an intellectual and scholar of Judge Katzmann’s caliber teaching public policy at Georgetown helped create the foundation for what is now the McCourt School of Public Policy. Judge Katzmann was my great teacher and mentor for almost three decades. He was also in my wedding party. His passing is a profound loss.

Bob Katzmann was an extraordinary jurist and scholar, and an even more remarkable human being.  He was a bridge-builder across academic disciplines and ideological lines, and a builder of institutions and personal relationships wherever he worked. He was an ally to the less fortunate, a mentor to his students and clerks, and  a friend and generous and thoughtful advisor to his colleagues. But most of all, he was a person of boundless compassion and kindness to everyone who crossed his path, in ways large and small.  He made all of us better; he was a beautiful soul, and he passed a bit of that on to each of us whose lives he touched.

If you knew Judge Katzmann from your time at GPPI and would like to share a reflection, please email Lauren Mullins.